Back in real-life medieval times, time had a different meaning for most, if not all, of the population. Nowadays, in our books and in our minds time works like this: 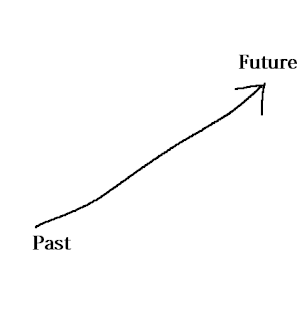 Simple shit, right? Time moves forward, we progress as a society, we save up money/knowledge/other shit, give it to our youth and so on. Things get better, technology and our understanding of the world advances. It's what makes modern times "modern."

But what if you're a dirt poor serf who has been making food on his lord's land for the past eight generations? You don't have anything to look forward to. Your average medieval family will never move on past their little square of dirt that they don't actually own. You're just waiting around until whatever god decides it's time for the apocalypse. You try to be a faithful, decent, person have a family, and then die. Money cannot be saved up for very long. Modern science, modern philosophy, modern medicine, the fucking concept of modernity doesn't exist. You don't keep history books because it's been basically the same for the last hundred years, and there is no reason for anything to change for the next one hundred.
Your time looks like this.

In our world's medieval Europe, it was the peasants waiting for the second coming.

The majority of the populace in my setting, Oris, mostly think this way. Most cannot even conceive of anything else.  You are waiting until death, or the church tells everyone it's time for everyone to finally "go home".

There are wizards, of course, there are always wizards. And kings, rulers, and wealthy people who have grander designs for their heirs. The Game is still played, of course. But do these people really think in straight lines, moving forward?
On Oris it's not a game of who will win the right to the future, it's who will be remembered at the end.
And the end is fucking coming.
The gods are disappearing from the sky, and religions without pantheons are springing up. Nobody knows where these people get their powers from, and one church has taken over a third of the continent within 300 years. It's scaring the shit out of everyone else.

The Magus-King of the Magi Lamentorious wants to be there to see it.
So does The Last Empress, but she toils in spite of it all, against the Militant-Corporations who hope enough gold will shield them when the final day is here.
This is The Game, the war for the right to exists until the end (and maybe claim what is left after.) Sometimes its about achieving immortality, sure, but other times its the about preserving an idea, a family name, or a purpose.
The Game deserves its own post, so I'll stop there. I guess the point I wanted to make is: how we think about the future and where society is headed is a relativity new concept in the history of man. So take that and run with it.

Posted by GeneralApathy at 2:38 AM 2 comments:

I like to ask my players a character building question or two, something inane and innocuous to get them in the right frame of mind. (also as a way to buy time while I do last minute prep) Simple stuff like "what's your favorite color?" or "if you could write a letter to someone right now, who would it be?"
It gets them in the mood to play their characters and gives the GM a little extra information.
This is an old left over from my acting days, and while I forget sometimes, I find my players like it.
I cannot recommend it enough.

Always keep notes when they answer. Occasionally have them write it down and pass it in as a note, if it involves a secret the others don't know. Keep these secrets, they are useful.
Make sure one is "what was the most embarrassing thing that has ever happened to you?"
I will explain later.

After you collect these little snippets, sit on them.  Wait until your players have almost forgotten which particular answers you asked.
Then use it on them!
It doesn't have to be just used against them, you don't want them feeling punished for sharing more about their character. A pen pal uncle, or a fear of spiders, can be a exploited for weakness, sure, but can also provide opportunity for grounding the players in the world.
Surprise them with a handwritten letter (with a little bit of gold) from Uncle Grumsbludd a year after they told you about him. It's much easier than getting them to write out an introduction for each character, especially if your game is higher on mortality.

Anyway, here's a monster/trap that does the opposite. Remember that "most embarrassing thing" question?

The Sensitive Know-Mound
It looks like a large spider that has just shed its exoskeleton, but jellied and fleshy.
It stirs a bit in the stale air, was that a breeze, or is it breathing?
In the dark corner of a cave or tomb, it can almost seem alive.
But it is not exactly a monster, as anyone attempting an attack will find out.
Any weapon or spell easily tears into its odd flesh, and if they do a cloud of spores pour out from the damaged fungal sac.

The spores are the real enemy, it floats in the air and sends small electrical signals to function together like a neural hub, and while unable to defend themselves in any physical way, they can read minds really fucking well. (Say a 30ft radius) With this information, it can make faint images appear within it.
It starts out by just driving you away, showing things you don't want to see, foggy images of embarrassing moments that you haven't shared with everyone. (Hence why you asked the embarrassment question.) 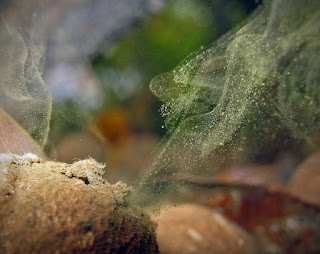 This alone won't deter players though, so the spore cloud gets creative. It starts with embarrassing truths, but then jumps to incriminating lies. It will single out whoever the group suspects the most, as the cloud can tell. The cleric whose religion kinda sketches everyone out? The cloud shows them drowning babies. Images of the roguish type robbing allies. That kind of stuff.

Local legend says its a hallucinogen that shows only the ugly truth, and it's led to quite a few mob justice executions.

Lighting it on fire triggers its reproduction cycle, and it will grow and stick on your clothes, forming lumpy fungal mounds, and can easily suffocate a grown man.  The cloud of spores can be blown away with a strong wind, and water makes it clump together into a heavier solid form, thereby drowning it.

Warning: This is good for creating a little bit of party tension, but I never find two players killing each other to be very fun.

Be careful with this unless you can trust your players to not fuck it up. Its a challenge where the answer is trusting your pals or figuring out the spore cloud's lies. This bad boy works great against hirelings too, forcing morale checks and sowing distrust, especially since the players likely won't know them as well. 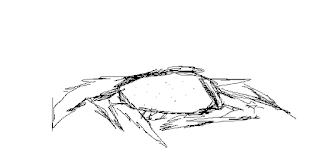 Posted by GeneralApathy at 7:29 PM 2 comments: